We had a long day in the saddle today. We left our hotel at 8:30 and headed south along the coast to Ventura. New bike paths have been put in along Highway 101 and are connected to bike Lanes through Santa Barbara, Montecito and Carpinteria. So you never have to get on to 101 to go up and down the coast. Even though the weather predicted today was very warm, the marine layer kept us pretty cool for most of the ride. The Sun finally came out as we made our way back up the hills above Santa Barbara to our hotel. It was a very different day from yesterday! 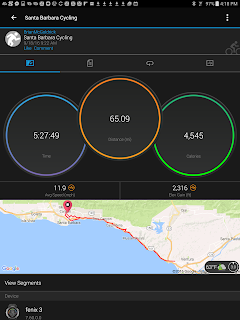 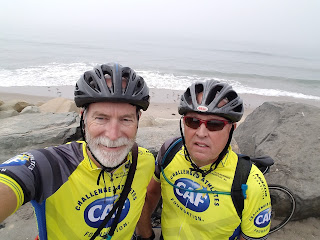 Along the coast near Ventura. 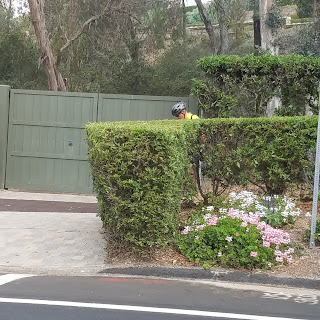 Can you guess what Peter is doing???

It took us longer to get out of the hotel and on the road to Solvang than we originally thought. It also ended up being a lot warmer then I had planned for. We planned to ride from Solvang to Los Olivos and along Foxen Canyon Road. We were hoping to ride up Foxen Canyon and turn around at about 40 miles to give us an 80 mile training ride. By the time we got to the Foxen Winery it was in the high 90s and we were exhausted from the heat. We also didn't bring enough food thinking that we would be able to eat somewhere along the way. But there are no restaurants along Foxen Canyon Road so we turned around and headed back to Los Olivos. We finally found a small Winery that had some cheese and crackers and we both thought we had died and gone to heaven! We ran into the same people at several of the wineries and they all thought are riding jerseys were a big hit! I don't have a road profile to attach because I didn't charge my watch the night before and so it died about 40 minutes into the ride! With no cell signal we really had no idea what we were doing out there. So much for Brian being the fearless leader! Definitely need more planning for our future training rides. 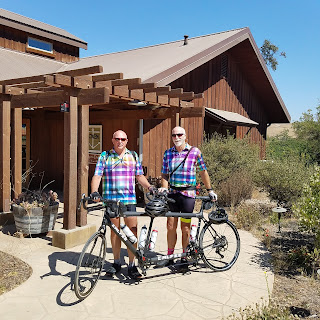 We were in a lot more pain than it looks like here!! 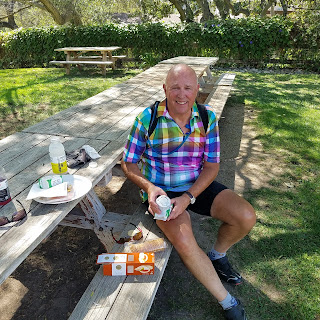 Peter finally gets to eat!

We drove up from San Diego and are staying at the Belmond El Encanto Inn Santa Barbara. Very swanky! After lunch on a beautiful patio we put on our riding togs and drove to Solvang. We did a wonderful 50 mile training run alone highway 246 from Solvang to Lompoc and return Via Santa Rosa Road. It was a beautiful farming valley with very little traffic and some wonderful hills to slowly climb and then race down the other side. Tomorrow we hope to do about 80 miles. 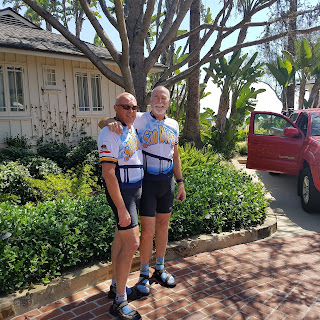 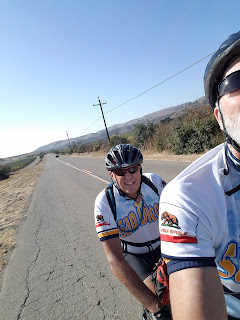 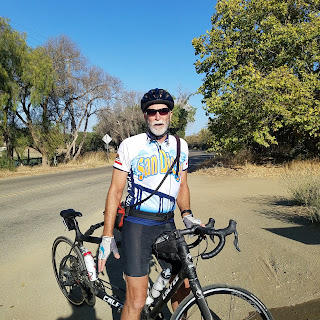 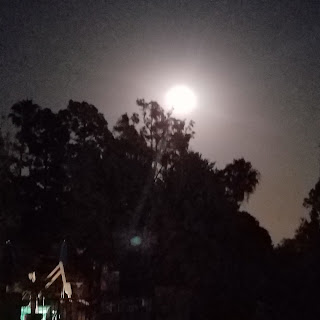 Posted by Friend at 7:40 AM No comments: 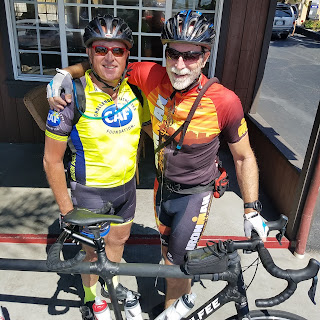 A month from today we'll be leaving San Francisco's Embarcadero, riding through the city heading for the beach. Once there we'll be riding along the cost almost the entire way! It should be fun, difficult, beautiful, exhausting, inspiring, grueling and just about any other adjective you can think of!

This week we're in Santa Barbara doing some training rides. I'll post some pictures as they become available.

Please come back for regular updates and thanks for your support for Challenged Athletes Foundation.

Brian & Peter
Posted by Friend at 9:18 AM No comments: